Vasily IV Shuisky is one of the most controversial tsars. He was a master of intrigue who changed sides many times. His short rule during the Time of Troubles was only partially recognized. 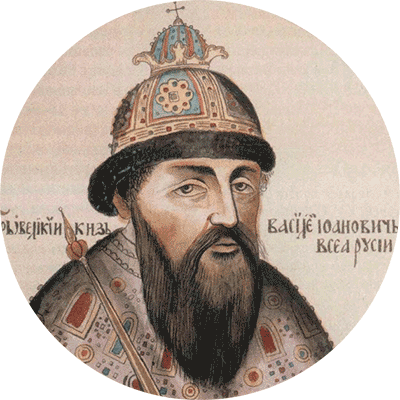 Background
Lived: 1552-1612.
Vasily IV Shuisky was a prominent boyar from the famous Rurik family. He was involved in intrigues against Boris Godunov after Ivan the Terrible died.

When Godunov came to power, Shuisky made a great career for himself in his service. He was an investigator in tsarevich Dmitry’s possible murder case, where he testified that Godunov was innocent.

False Dmitry
In 1603, Vasily Shuisky changed sides and joined the forces of False Dmitry, claiming that Godunov was the murderer and had to be deposed.

When False Dmitry became tsar, Shuisky successfully plotted against him and had him murdered. He stated publicly that he had not told the truth earlier and that False Dmitry had in fact been an impostor.

Reign
After the murder of False Dmitry, a group of boyars elected Vasily IV Shuisky to be the next tsar. These were desperate times and his position was very weak. He managed to keep the throne only because there was no better candidate around.

False Dmitry II
In 1607, a new enemy, False Dmitry II, besieged Moscow. He claimed to be the miraculously saved (False) Dmitry. Vasily IV Shuisky had no other option but to offer some land to the Swedes in return for military aid.

The joint Russian-Swedish army had, however, little success, and Vasily Shuisky was deposed by the boyars, imprisoned, and sent to a monastery in Poland.