The most important Minister of the last two Emperors of Russia. Under his supervision, Russia finally entered the Industrial Age and Nicholas II opened his first parliament. 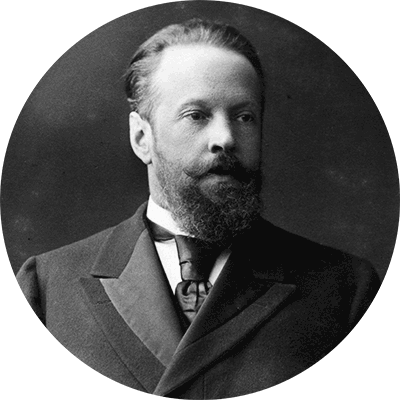 Background
Lived: 1849-1915.
Sergey Witte was born in Tiflis Georgia. He studied mathematics at the University of Odessa and became an expert on transport economics.

After the famous Borki train disaster (1888), where the royal family was nearly killed, he was appointed Director of Railway Affairs.

Industrialization
As a Minister of Transportation, he initiated the construction of the Trans-Siberian Railway, that was an enormous project.

As Minister of Finance from 1893, he undertook several measurements that initiated the industrialization boom of the 1890s. His neo-mercantilist policy has been often called the “Witte System”.

He attracted foreign investments and large beneficial loans (mainly from France). With the help of the monetary reform, state’s spirit monopoly and high taxation, he managed to create a favourable economic environment.

Thanks to his old enemy Vyacheslav Plehve he was deposed and sent to negotiate peace with Japan after the embarrassing Russo-Japanese War of 1905.

October Manifesto
Nicholas II appointed Witte as his Prime Minister in 1905. After the Revolution of 1905, Witte prepared and presented the Emperor the famous October Manifesto.

It gave Russia its first electoral parliament namely Duma. Nicholas very reluctantly signed it and forced Witte to resign the next year.

Witte never returned to politics, but lived quietly in St. Petersburg, where he died in 1915.