Empress Consort and wife of Alexander III of Russia. She was very popular and loved. She outlived her tragic son Nicholas II by ten years. 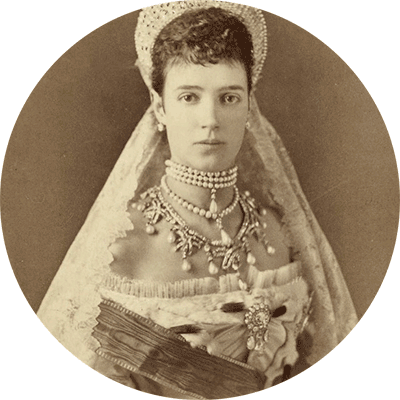 Background
Lived: 1847-1928.
Maria Fyodorovna was born as Princess Dagmar of Denmark, in Copenhagen. Her mother and father Christian IX were called “Grandparents of Europe”, because their children had been married to King Edward VII of Great Britain as well as kings of Romania, Spain and others.

Life
Princess Dagmar was engaged to Grand Duke Nikolay Alexandrovich, who was the eldest son of Alexander II. Nikolay (simply called “Nixa”), died in 1865 of meningitis.

The Princess was inconsolable. According to Nixa’s final request, his younger brother, the future Emperor Alexander III, proposed to is brother’s widow in 1866.

Maria Fydorovna was very social, pretty and charming. She loved public ceremonies and she spoke to ordinary people. Due to the threat of terror, they moved to the Palace of Gachina. Maria gave birth to 6 children.

After the death of her husband in 1894, her son Nicholas II became Emperor. During the Russian Revolution, Maria moved to Kiev and later to Crimea where she worked for the Red Cross.

Death
In 1918 she learned, that Nicholas II had been murdered by the Bolsheviks. She was persuaded to leave Russia and she returned to Denmark, where she died in 1928 at the age of 81.