Alexander III was known as “The last true autocrat” and “Peacekeeper”. His reign did not see a single war. He is sometimes referred to as the most “Russian” of all the Russian rulers. 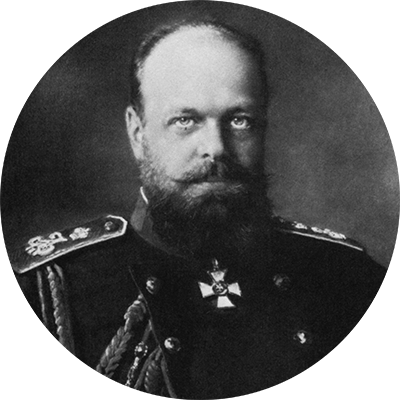 Background
Lived: 1845-1894.
Alexander, the second son of tsar Alexander II, was not prepared to become a ruler until his elder brother Nikolay died. Alexander had been educated by the reactionary Konstantin Pobedonostsev, who opposed and criticized tsar Alexander II’s reforms.

Family
After his brother Nikolay’s death in 1865, Alexander III was ordered to marry his brother’s fiancée Danish princess Dagmar, who then took the name Maria Fyodorovna.

They had a very happy marriage, and Maria, who he called “Minnie”, bore him 5 children. Alexander was an exemplary husband and father. The whole family moved from the Winter Palace to the country residence in Gatchina. Alexander was physically very strong and tall, although not well-educated.

When the imperial train derailed in an accident at Borki, the tsar is reported to have saved his family by holding up the collapsed roof with his back so that they could escape the wreckage. 23 people lost their lives in the accident.

As an emperor, Alexander handled foreign relations appropriately. On one occasion, the Foreign Minister Giers approached him with an urgent matter concerning European policy. Alexander III dismissed him saying “When the Russian tsar fishes, Europe can wait”

Death
Despite of the assassination attempts, he died of natural causes at the age of 49.