The ideological leader of the Soviet cause in Russia. He was the first Premier of Soviet Russia. It was very much due to his political astuteness that the socialists were able to seize power in Russia in 1917. 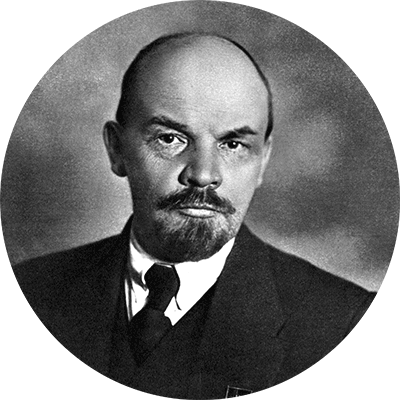 Background
Lived: 1870-1924.
Vladimir Ulyanov (Volodya) was born in Simbirsk to a wealthy middle class family of German, Jewish and Kalmyk origin. His mother Maria was a teacher and father Ilya, a school inspector. Volodya’s Secondary school’s headmaster was Kerensky’s father. When Vladimir was 17, his brother Alexander was hanged for having attempted an assassination of tsar Alexander III.

After joining the revolutionary circles in St. Petersburg, he was exiled to Shushenskoye village in Siberia in 1896. There he married Nadezhda Krupskaya  in 1898 and went under the pseudonym Lenin for the first time.

Career
From 1900-1917, Lenin and Krupskaya were prominent members of the émigré Russian socialist circle in Europe. The two were involved in a love triangle with Inessa Armand in Paris.

After the February Revolution, Lenin was aided by German intelligence services, which provided safe passage to Russia as well as a substantial amount of money. Lenin’s April Thesis, a significantly more radical vision of communism, was at first largely ignored, but he eventually managed to convince the party to start an armed insurrection in November.

Death
Lenin’s health deteriorated after an assassination attempt by Fanni Kaplan in 1918. In May 1922, Lenin suffered a stroke and retired to his Gorki estate.

Lenin suffered two more strokes in 1922 and 1923. He became speechless and was completely paralyzed. He died on his estate on 21 January 1924. The cause of death was syphilis.