Mikhail Kalinin was a formal president of the Soviet Union. Nicknamed “Grandpa Kalinin”, he was merely a symbol with no power. Stalin needed him to symbolize the union of proletariat and peasantry. 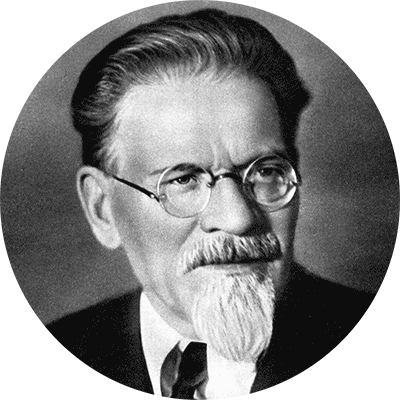 Background
Lived: 1875-1946.
Mikhail Kalinin was born in a poor peasant family of Tver. He moved to St. Petersburg and worked briefly as a servant.

While working at the Putilov Iron Works, Kalinin came into contact with revolutionary circles and joined the Social Democratic Labour Party in 1898.

Events
Personal aquaintance with Stalin helped him make a career in the Communist party. After the October Revolution, Kalinin became the Mayor of Petrograd.

Head of State
In 1919, after the death of Yakov Sverdlov, Kalinin was appointed the next Chairman of the All-Russian Central Executive Committee. His agrarian origin was the main reason why he made a perfect example of a President who is a peasant by origin and a factory worker by trade. He was kindly referred to as the “All-Union Headman”.

Mikhail Kalinin had absolutely no power and never made he any attempt to question Stalin’s decisions.

Family
When the Great Purge was triggered in 1934 Kalinin had no choice but to sign all Stalin’s decisions without questioning. It was so also in the case of his own wife Yekaterina Kalinina, who was arrested in 1938 and falsely charged of treason. Kalinin did not do anything to save his wife.

Death
Mikhail Kalinin died in 1946, at the age of 71, one year after his wife was released.