He was the Russian Foreign Minister in the time of Alexander I and Nicholas I. During his forty years of ministry he acted as the Europe’s leading conservative statesman and the defender of the Holy Alliance. 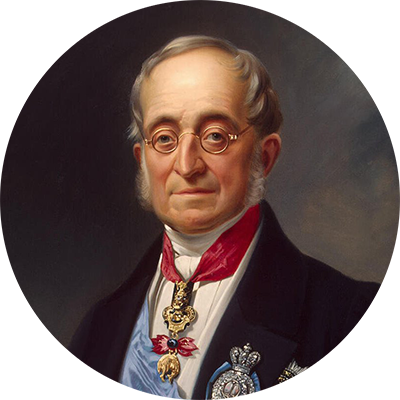 Background
Lived: 1780-1862.
Karl Nesselrode was born in Lisbon, Portugal as a son of a Russian ambassador. He studied in Berlin and served in the Russian navy.

Congress of Vienna
Nesselrode’s diplomatic career began in Berlin and Hague. He was sent on a mission to Germany to report on the moving French troops. He then took part in the Tilsit meeting (1807) between Alexander I and Napoleon.

Nesselrode was the head of the Russian delegation at the Congress of Vienna in 1814. Alexander I did not use his advice much in Vienna, but acted as his own foreign minister.

Foreign Minister
Karl Nesselrode served as Minister of Foreign Affairs of Russia in 1816-56 . For the first six years, he shared his influence with the Greek politician Ioannis Kapodistrias, who resigned in 1822.

As a defender of the Holy Alliance and conservative monarchist, Nesselrode gave orders to send troops to put down the Hungarian Revolution (1848) led by Lajos Kossuth.

Nesselrode tried to extend Russia’s influence to the Ottoman Empire. The Unkiar Skellesi Treaty (1833) was signed with the Turks.

Crimean War
Nesselrode could not, however, alter the inevitable war with Great Britain, France and Turks. As a result, the humiliating Treaty of Paris (1856) forbid Russian ships to sail on the Black Sea.

Death
Nesselrode resigned immediately after the Treaty of Paris, but continued as a Chancellor (1845-62). He died at the age of 82 in St. Petersburg.