Joseph Stalin is one of the most blood-thirsty, most powerful and feared dictators in the history of the world. The death toll due to the actions of his regime is estimated to be between 20 million and 60 million people. 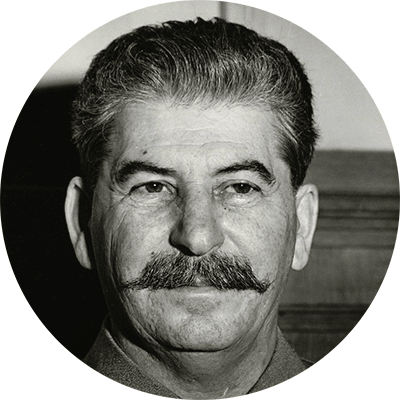 Background
Lived: 1878-1953
Iosif Vissarionovich Dzhugashvili was born in the Georgian village of Gori. His father Vissarion was a violent drunkard shoemaker who used to beat his wife Yekaterina.

Life
Iosif, nicknamed Koba, attended the Gori church school and Tiflis Theological Seminary. Between 1902 and 1913 Koba was arrested 6 times for revolutionary activity and sent to Siberia. Stalin (the “Man of Steel”) was responsible for organizing several bank robberies to provide the party with money.

Russian Revolution
As a close follower of Lenin, he became the Commissar of Nationalities. He also participated in the Russo-Polish War, allegedly undermining Tukhachevsky’s campaign to take Warsaw.

Rise to power
In 1922, Lenin named Stalin his personal General Secretary. That minor office enabled him to gather an enormous amount of invisible power. He skillfully played one opponent against the other and destroyed them all one by one. By 1929, he was the undisputed dictator of Russia. No person could feel safe as long as he lived.

Personal
Stalin was only 160 cm tall, his left arm was slightly paralyzed, and his face was covered with small-pox scars. He loved the cinema and hunting. He read 500 pages a day and organized drinking parties, where his comrades were usually tense with fear.

Stalin’s wife Yekaterina Svanidze died of typhoid fever. Their son Jakov Dzugasvili was later imprisoned by the Nazis and rejected by Stalin. His second wife Nadezda Allilujeva shot herself in 1932 after a family row. Their son Vassily Stalin became a war pilot, and their daughter Svetlana Allilujeva defected from the Soviet Union in 1967.

Death
Joseph Stalin grew extremely paranoid and feared poisoning in his later years. He was, accordingly, not disturbed when he failed to come out of his room as usual on the morning of 1 March 1953. It was only in the evening that he was discovered on the floor of his bedroom. Stalin had suffered a severe stroke and died 5 March 1953. Some people suspect that Beria had poisoned him.